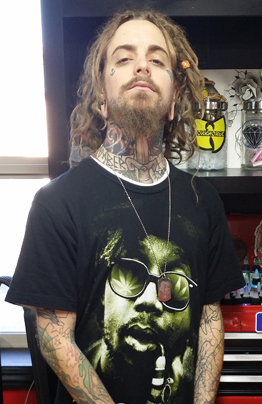 Little Steven started his tattoo career in The Central Valley of California late 2003. He worked in the Visalia area, then opened up a shop In Tulare which he worked from for nearly 5 years before closing up shop and coming to the Central Coast to further establish himself, and better support his family.

He worked alongside Keith Duggan in Grover Beach before leaving to join Keith at Ink Dynasty. Steven enjoys doing Mostly American Traditional color tattooing, or anything that is bold with heavy color saturation, traditional Japanese, and some black and grey work. He focuses on making tattoos that are bold, and can stand the test of time.